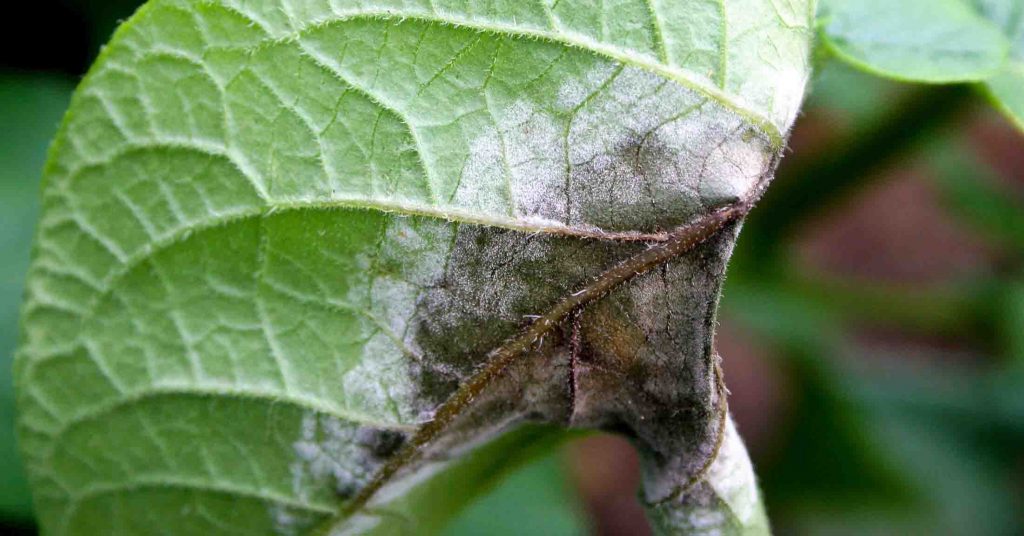 The EuroBlight network was set up to monitor early and late potato blight populations across Europe and is made up of 150 academic and commercial specialist members.

It keeps an eye on genetic variation in blight populations and monitors fungicide performance against disease, spotting any potential issues that could cause management failures in growers’ fields.

Of particular interest is the marked increase in two clones that originated in Denmark.

The first is EU_41_A2, which has spread to The Netherlands, Belgium, France, Iceland and Scotland, notes David Cooke, James Hutton Institute potato pathologist and EuroBlight member.

He says that, although drivers and source of the spread are unknown, it’s thought to be a combination of seed-borne infection and conducive conditions in 2021 enabling crop-to-crop airborne transmission.

Research at France’s INRAE institute has suggested that EU_41_A2 is more virulent on some potato varieties considered resistant to blight, so is a concern to the European potato industry, but has so far prompted no changes in practical advice.

There has also been spread of EU_43_A1, which until this year had only been found in Denmark but is now found in the “low-countries” of Belgium, The Netherlands and Luxembourg.

Dr Cooke says that its virulence, aggressiveness or insensitivity to fungicides is not yet confirmed.

“The phenotype of EU_43_A1 certainly warrants investigation in 2022 to understand if management practices need to be changed in response,” he adds.

Elsewhere, the data shows a stable population of genotypes labelled “other”, which account for about 25-30% of samples.

This genetically diverse group is a source of novel virulence and fungicide insensitivity traits and this potential is worrying as policy shifts away from fungicide use for control of blight to host resistance.

With ten late blight fungicides withdrawn within the EU since 2018, there will be increasing pressure on both genetics and the remaining active substances in the seasons to come.

“Resistance introduced by the breeders needs to be durable, and this will require a better understanding of the host resistance and the pathogen effector gene evolution than we have now,” notes Dr Cooke.

Closer to home, Fight Against Blight received positive samples from 210 outbreaks during 2021.

The major story is the continued rise of the aggressive EU_36_A2, which increased from 29% to 40% of the sampled population.

Genotype 6_A1 reduced from 35% to 24%, 13_A2 remained below 1% and EU_37_A2, which is insensitive to fluazinam, was stable and accounted for 9%, suggesting growers have adjusted fungicide programmes to avoid selecting for this genotype.

Clones labelled “other” in Britain have typically been lower than in Europe, but this section of the population increased from 14% to 18% in 2021, predominantly in samples in northeast Scotland.

Another significant story from 2021 is the arrival of EU_41_A2 to Britain, which was found in a single crop in Fife.

A new genotype EU_44_A1 was also sampled in Scotland, Wales and England.

Fight Against Blight also tests isolates for sensitivity to fungicides, and there has been no change in the efficacy of the key late blight fungicide groups.

In practice, results from 2021 don’t result in significant changes to blight management advice in the AHDB Fight Against Blight report, published last month.

Most inoculum is from clones surviving over winter, so the often-repeated warning about volunteer and cull pile management is reinforced. This will help reduce primary inoculum load.

The march of EU_36_A2 is a worry, with severe infections reported – particularly across East Anglia where it was responsible for 60% positive samples locally – and data suggests it is more aggressive and damaging than other strains.

Dr Cooke says this should focus minds on maintaining tight spray intervals and sticking to Fungicide Resistance Action Group (FRAG) guidelines to keep the disease out and protect fungicides from resistance.

Good application of blight fungicides is also vital, with underdosing around field edges and where sprayers come in and out of work attributed to several East Anglian outbreaks last year.