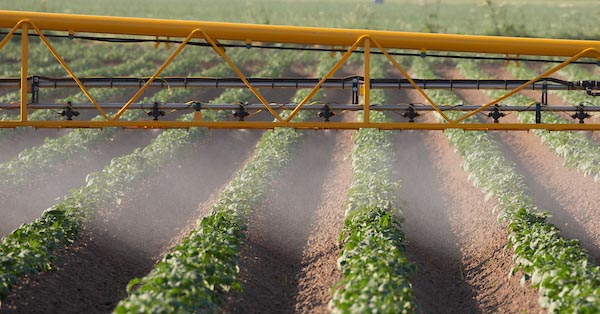 More than 200 outbreaks of blight were reported to the Fight Against Blight monitoring service across the country in 2021, and in some areas, the disease was particularly problematic.

According to AHDB’s Fight Against Blight monitoring, the proportion of outbreaks attributed to the aggressive 36_A2 genotype continued to rise and now represents 40% of the sampled population.

However, in East Anglia, the same genotype was responsible for more than 60%, and agronomists reported a particularly difficult year for keeping a lid on disease in susceptible potato crops.

One common factor seems to be underdosing of blight fungicides on headlands, around obstacles like power poles, and on the edge of land work.

The latter can sometimes be attributed to the incorrect setup of GPS systems that control shut-on and shut-off points and not maintaining a constant speed when crossing the in-field headland boundary.

Application expert Tom Robinson says that as a sprayer approaches a boundary, it will predict where to switch off the boom based on forward speed and the distance of the receiver to the boom.

He says first and foremost, operators should try and cross the boundary at the same speed each time, both in and out of work.

“Secondly, the GPS unit on the sprayer must be set up right. If you trust it to luck, then it will be wrong. It’s essential that the sprayer doesn’t turn itself off beyond the point where it starts to slow down and vice versa,” he explains.

Rowan Reed, sales and service engineer at precision farming and Topcon specialist LH Agro, says most GPS systems do much of the prediction work themselves.

However, there is always a slight delay between when the command is sent to switch off the spray section and when the product stops flowing.

This means the operator must input a time prediction of when the boom or boom sections will cross the boundary line coming in and out of work, based on a set working speed.

He says it is sensible to enter as short a time as possible when coming into work (on time) and a lengthier delay when coming out of work (off time).

“A small overlap isn’t the end of the world – a miss is much worse. I’d advise doing some test runs to ensure the machine is working as it should be.

“That involves marking where you want the boom to turn on and off with a cane and have someone watch to see if the prediction times in the GPS are accurate. It’s a case of finding the sweet spot between the miss and overlap,” he explains.

In other areas, solutions aren’t quite as palatable. Around power poles and other obstacles, it is better to leave ground unplanted if possible, so operators won’t have to slow down or turn during application dramatically, says Mr Robinson.

Negotiating obstacles has the potential to underdose across the whole boom or on the outside of the boom due to the speed differential from one end to the other when turning.

Similarly, where there are relatively sharp bends on a headland, planter operators should look to square off beds instead of following contours.

Mr Robinson says with a standard sprayer and pressure-based rate controller, there is no magic fix other than tweaking field layout to ensure the sprayer operates at cruise speed as much as possible.

However, those looking for a technical solution could look to a pulse width modulation (PWM) system or an equivalent, like Altek’s Smart C Spray 124.

These systems can maintain an accurate dose across a more comprehensive speed range and offer turn compensation, adjusting the output of each nozzle based on the forward speed of the boom.

“The outside of the boom will always go faster than the inside, so if you go around turns, you are asking for blight.

“To the best of one’s ability, it should be avoided, or invest in pulse width modulation for more even coverage,” adds Mr Robinson.