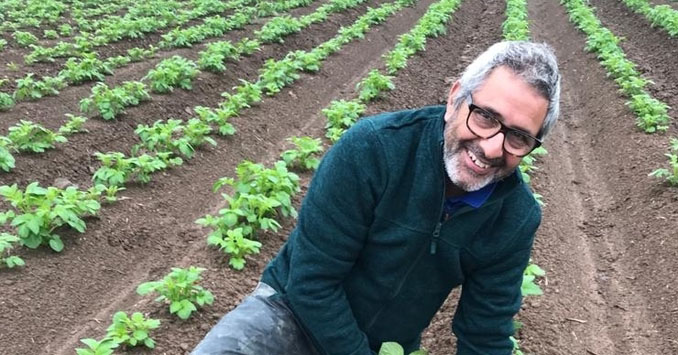 So, here we are in the first week of July, the nights have started to draw in, it’ll soon be Christmas… oh joy! Still, lots can happen yet, with the key drivers of water and radiation determining the final outcome for potato crops.

I am hearing that in East Anglia, the crops’ requirement for irrigation has been every three days, with infrastructure and water supply proving challenging. Unirrigated silts in Lincolnshire are also very dry, as is the Yorkshire Wolds.

Recent rainfall from heavy and slow-moving showers has eased the pressure somewhat in Northumberland and the Borders, although river levels remain very low. Where possible, irrigation is being applied at night to reduce the effects of evapotranspiration and wind.

Early chipping crops of Accord are being harvested in Cheshire, yields are about average, quality is good, but the price is under pressure, mainly due to the amount of old crop still to move.

Early crops for McCain and the crisp markets in Cheshire are looking to be on track, irrigation being applied to some. However, questions are being asked about the cost of fuel and the potential for producing tonnage surplus to contract.

I would suggest that the cost of applying an acre inch of water now to be somewhere between £60-£80.

Further blight has been found in Cheshire, the latest being from seed inoculum, genotyping shows it to be 37_A2, justification for not using fluazinam in any of my blight spray programs.

Over the last few months, I have seen and heard of several crops showing signs of rhizoctonia, not just typical stem browning and stolon pruning, but also curling of top leaves.

In my experience this is mainly because of cool but dry seed beds and the inoculum being present, in the form of black scurf, on the seed tubers.

Indeed, in most cases, close examination of the seed reveals lesions of black scurf.

In days of old, a routine application of 1kg/t pencycuron (Monceren DS) was made, it was cheap, it could be sprinkled over the seed on the planter, therefore easy to apply and dealt relatively well with seed-borne inoculum.

Currently, the only tuber treatment that can be applied on-planter is flutolanil (RhiNo DS) with 2kg/t recommended. This must be applied through an applicator, not sprinkled on, but still manages to coat everything on the planter, not just the potatoes, often the operator too. Several growers refuse to use it on operator safety grounds.

So, to my point, the seed classification scheme includes a seed tuber inspection which is carried out on un-washed seed, therefore black scurf might not necessarily be seen.

In my opinion, it is down to the grower, their agronomist, and seed supplier to wash up the seed and to decide on a course of action. As a grower I would always ask for a wash-up report from my seed supplier so I could make decisions on how to manage the seed.

It is worth remembering that in-furrow applications of either azoxystrobin (Amistar) or fluxapyroxad (Allstar) do not have any effect on tuber-borne inoculum. Therefore, if there is black scurf on the seed, in my opinion, the seed should be treated.

Over the next couple of weeks, my focus is going to be on the need and timing of maleic hydrazide (MH).

In some unirrigated crops, I am already seeing signs of secondary growth and chain tuberisation.

Normally I would be looking towards the end of July/early August, we could be two weeks earlier this year. Weather and crop conditions at the time of application are crucial, which could be a real challenge if it remains dry.