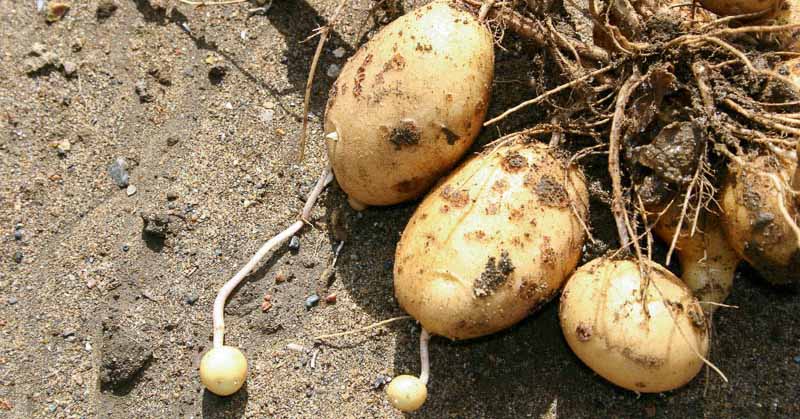 Scientists at the James Hutton Institute (JHI) have found ways to improve the heat stress tolerance of potatoes that could help make the crop more resilient to weather extremes.

This includes poor tolerance to drought, frost, and high temperatures, with the mercury creeping above just 20C enough to affect crop yield and quality negatively.

Some of these impacts have been seen in areas of England over recent seasons, with consistently high summer temperatures in 2020 resulting in sprouting in the ridge and chain tuberisation.

Elsewhere in the world, namely in Southern Europe and the Middle East, rising temperatures could threaten the sustainability of potato production and limit export opportunities for British seed producers.

These species originate from various climatic zones worldwide, so contain a range of tolerances to biotic and abiotic stresses specific to each region.

Dr Taylor and a consortium of stakeholders have been delving into the treasure trove of genes in the JHI germplasm set to try and find genetics to make potato varieties more tolerant to heat stress.

Clones have also been tested in the field, both in the UK and Malawi in south-eastern Africa, and tolerated heat much better than other varieties.

Unexpectedly, the clones also had less propensity to potyvirus.

Testing of the mechanism behind the increased tolerance from HSc70 suggests that faster recovery from heat stress with less heat-induced membrane damage was driving the positive results.

The consortium’s work also found that potato plants can naturally acquire tolerance to heat in the field.

Understanding the science behind the phenomenon could help reduce crop losses in commercial production.

Plants were kept at 18C, then quickly exposed to 40C, and this caused severe damage or plant death.

However, when they were moved from 18C to 25C for a period before exposure to 40C, plants were “happier and less damaged”.

While plants could acquire the tolerance, it was also quickly lost in 12-24 hours when moved back into moderate temperatures.

“So far, we’ve been unable to identify the mechanism, but it’s definitely an area that needs to be investigated further,” said Dr Taylor.

Heat tolerance hasn’t been the only target, and Dr Taylor and the team at JHI have been searching for genes that regulate the lifecycle of the potato tuber.

This has led to the discovery of the TFL1B gene that controls the speed of the tuber lifecycle.

Knocking this gene out using gene-editing technology resulted in the production of mini tubers in 45 days, rather than the typical 75-80.

This would almost halve the production time, cutting costs and minimising environmental exposure for a seed producer, leading to healthier seed.

Also, part of the genetic code controlling the tuber lifecycle is TFL1C, which Dr Taylor believes is involved in the determinacy of the potato plant.

He said this is a key target, as it is another gene believed to be related to water and nitrogen use efficiency traits, which are becoming increasingly important due to climate change and other environmental pressures.

Asked when growers might see some of these traits incorporated into commercial varieties, he said: “Conventionally, you are looking at ten years, but using a gene-editing approach there may be [commercially acceptable] varieties much quicker.”

This article is based on an Advanced Plant Growth Centre webinar titled: Future-proofing Potato.