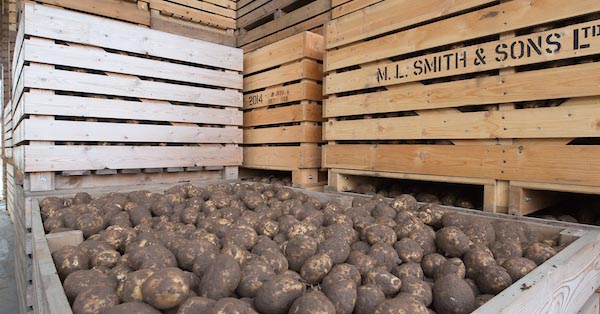 SWISS agronomy research group Agroscope has produced a new model for predicting potato dormancy, which it hopes will help improve the management of sprouting in stores.

The Europe-wide ban on chlorpropham (CIPC) has proven to be a significant headache for the potato industry across the continent, as it provided relatively cheap and long-term residual control of sprouting.

Growers have been left with alternatives, but all have disadvantages, and depending on the product, these include higher costs, potential residues, maximum residue levels or unsuitability for some specific markets.

This growing season has been an example of how warmer temperatures can impact potato dormancy, with the dormancy of varieties shortened when crops are exposed to extreme heat.

Agroscope’s Margot Visse tells potato-farming.com that there is also consumer demand for a reduction in pesticides, something reflected in the European Union’s Field to Fork initiative.

Ultimately this means that sprouting should be monitored much more carefully than before, so farmers can make the right decisions on using sprout suppressants, maintaining control while minimising the use of chemicals.

This has prompted Agroscope to produce a predictive model which can predict potato dormancy with a validation precision of just under 15 days.

It uses variety and the sum of daily maximum air temperatures from planting to harvest as predictors. It differs from previous models because it is based on an unprecedentedly extensive set of data.

The dataset was compiled from dormancy observations obtained from field trials managed by Nyon-based Agroscope over 25 years.

“This is in contrast to previous studies, which used limited and small-sized datasets with only a few varieties, or only a few years of trials.

“In addition, our predictive model uses predictors that are easy to record in the field [by farmers], which makes it an easy-to-use tool,” says Margot.

The model is ready to use, and the agronomy group are working on an online platform through which farmers can access and enter their site-specific data at the end of the growing season.

The tool will then use weather data and the model’s equation to give an approximate prediction of when sprouting will occur, based on a storage temperature of 8C.

This would then allow the grower or store manager to accurately target monitoring and any chemical interventions, potentially saving labour and applications of sprout suppressants.

“Given the growing impact of climate change on crop production, this predictive model could be used as an efficient and cost-effective tool to improve potato storage management and reduce losses caused by sprouting.

“The model is based on Swiss data, so before it can be used abroad, it should be validated on data from the country in question,” notes Margot.

Adrian Cunnington from independent consultancy Potato Storage Insight says there are mechanisms within the UK to build a dataset that could make a UK-specific model.

An example would be the Agri-Tech centre Agrimetrics, which was set up with public funding from Innovate UK and designed to help agri-food organisations realise the value of their data.

However, coordinating any potential effort might prove more difficult following the end of AHDB Potatoes.

“One of the challenges of producing a model like this is having enough comparable data to cover all the different scenarios that can unfold during a season and would take many years to compile.

“But, in theory, if we can get our research centres working together, then it could be a possibility in the UK in the future,” adds Adrian.