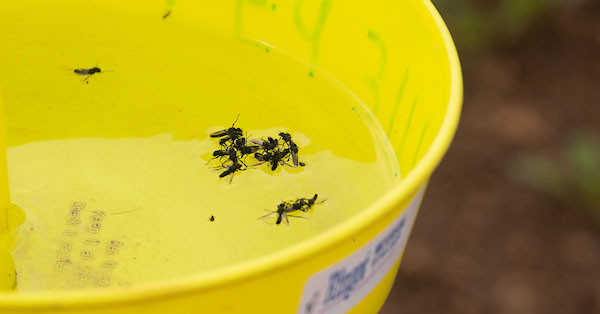 Growers are urged to take the threat of virus spread seriously as high numbers of important aphid vectors move into crops in key potato seed-growing areas.

Fera’s yellow water trap network – which monitors aphid numbers across the UK – has shown virus pressure to be eight times higher than average in late May and early June across Northern England.

This was largely driven by the early movement of willow-carrot aphid, cabbage aphid, potato aphid and peach potato aphid species.

Unusually high pest pressure was also detected in The Scottish Borders, Grampian and Northern Scotland over the same period, with potato aphid and, to a lesser extent, peach potato aphid the main threats.

In Angus and Perthshire, monitoring suggests a more average season so far, although that could change if weather turns favourable to aphids in the coming days and weeks.

This is against a backdrop of AHDB funding for Fera’s yellow water trap network ceasing ahead of the 2022 season, so the picture of aphid movement is arguably not as detailed or accessible as it has been in the past.

“We have less information available on aphids across the country, and some may be unaware of the wall of aphids coming towards them. There is a need to take the risk seriously.

“We are frequently getting non-colonising and colonising aphids in crops from emergence now, driven by climate change. There is a reluctance amongst seed growers to engage in as fulsome a programme as they should and as early as they should,” he explained.

Mr Anderson has been promoting the use of alternative methods to help reduce virus transmission, including straw mulches, cereal purge boundaries and predator strips, but has seen few Scottish producers adopt the techniques this year.

He has also been promoting the application of mineral oil for minimising transmission of non-persistent potyviruses like PVYN, due to the lack of effective conventional knock-down insecticides – a gap previously filled by pyrethroids.

CropSpray 11E is currently the only product option for willow-carrot aphid and should be used from 30% emergence up to tuber initiation.

Systemic insecticides should also be deployed to tackle colonising aphids that spread non-persistent and persistent viruses such as potato leaf roll (PLRV) in potato crops, where risk is identified.

There are just two active substances available to potato growers, flonicamid (for example, Teppeki, Afinto) and acetamiprid (InSyst), which can both be used twice in seed crops.

Flonicamid manufacturer ISK no longer backs the use of the active in potatoes because of the potential risk of maximum residue level (MRL) exceedances, particularly when used with adjuvant oils.

However, Mr Anderson said it can still be legally used in seed at the growers’ risk but stressed if doing so, no treated crop should make it into the food chain to eliminate the possibility of MRL issues.

“It means there are no merits in growing a dual-purpose crop, as it will be illegal to market as ware, and you are essentially putting product in store that has no value.

“With electricity costing about 32p/kW and typical spend on storage 80-100kW/t, storing stockfeed is prohibitively expensive,” he said.

In Yorkshire, Tom England is seed production manager for The Humble Potato Company, which grows about 250ha of seed potatoes each year, and the firm has taken a robust approach this season.

This is followed up by a second at full emergence and then at seven-day intervals with late blight sprays.

The first systemic insecticides have also been applied, starting with Teppeki (where contracts allow) and alternating with InSyst every fourteen days, to control the potato and peach potato aphids evident in local yellow water traps.

Applications of spirotetramat (for example, Movento) can be made in varieties that produce flowers from the end of flowering (BBCH 69), said Mr England.

He added that good PVYN reduction, caused by non-colonising aphids, can be achieved with mineral oil, and last year he experimented with wildflower strips to encourage natural aphid predators to reduce PLRV pressure.

“It was difficult to tell if it helped, as it was a relatively low-pressure year, but we are looking at it again this year to see if it has a place.

“The most important thing for us is planting high-grade input stocks with zero virus in [tuber indexing], cutting losses from the start,” said Tom.